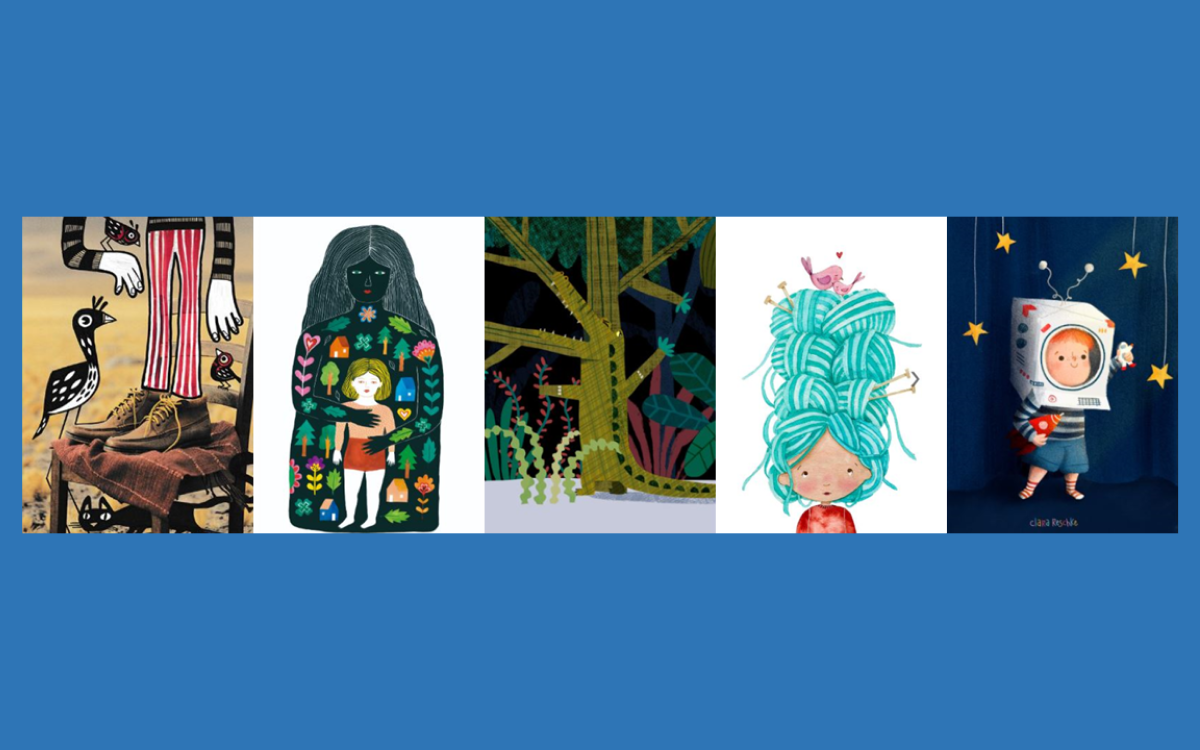 A special fully digital edition of the Bologna Children’s Book Fair took place from May 4th to 7th. This year the Illustrators Wall, which usually exhibits the work by artists from all over the world at the entrance of the event, was completely digital and included 31 Brazilian artists.

The Illustrators Wall included 2,500 participants from 5 continents and 80 countries, and it is possible to navigate the contents by continent and country and select those you may find interesting. By clicking on the images you see the illustrator’s profile, including the name of the artist, the title of the work and the country of origin. Also, a contact page is made available for business proposals.

The Brazilian artists participating in the Illustrators Wall come from all parts of the country, whether they currently live in the national territory or abroad, and their careers are unique, resulting in a rich mix of works. See below the history of five Brazilian artists included in this special edition of the event.

Born in the State of Pernambuco, in the Northeast region of Brazil, Murilo has been a book illustrator since 1995. He has created illustrations for schoolbooks and supplementary books. He is currently working with traditional xylograph. The title “Da guerra dos mares e das areias” (The war of the seas and sands), published by Quatro Cantos and illustrated by Murilo, was 2nd place in the Children’s Book category of the recent edition of the Jabuti Awards. His work chosen to be part of the Illustrators Wall was “Eu vejo coisas” (I see things).

Carla’s works are diverse and range from illustrations to sculptures. The artist graduated in Communications at the Pontifícia Universidade Católica do Rio Grande do Sul and in Illustration and Sculpture at Atelier Livre brings French surrealism references to her works, and some of them can be seen in places like the Modern Art Museum of Rio de Janeiro (MAM). The artist also participated in exhibitions and had her works displayed in galleries in the United States, Italy, France, Spain, Taiwan and Colombia. Her illustration included in the Illustrators Wall is “Archetypal Mother”.

Guilherme was born in the South region of Brazil and has been working as a book illustrator since 2010, when he won a national contest for new illustrators promoted by Livraria da Vila. He illustrated books such as “Carona” (Ride), published in French, English, Chinese and Korean, which is expected to be released in Brazil in 2020 by Companhia das Letrinhas. The artist also wrote and illustrated the book “Aaahhh!”, published in English and Korean. Last year, Guilherme won the BIB Plaque (bronze plaque) at the Biennial of Illustrations in Bratislava, Slovakia. His work entitled “Hunting” was chosen to be part of the Illustrators Wall.

At Anacardia studio, Ana Carolina transforms her recollections from childhood into illustrations of dolls like those she used to play with in her grandfather’s farm. The architect and artist also creates rag dolls that are loved by children and adults. As stated in her website, one of her missions is to awaken the inner child of each person. “Handmade is love” was her work chosen for the Illustrators Wall.

Clara used her talent to create a piece of work that reflects the new ways of finding inspiration. An illustration by Sara Amaktine she saw on Pinterest gave her an idea for the work entitled “Jake’s play”, exhibited on the Illustrators Wall. Born in São Paulo, Clara was graduated in Design at Universidade Federal de Santa Catarina, the State where she currently lives in. Additional to the works she exhibits in events, she also illustrates books.

About the Bologna Children’s Book Fair

For 57 years the event has been a meeting place for professionals from the children’s book industry and has as its purpose to promote business in such area, as well as in the segments of illustrations and multimedia content. This year the event was fully online for the first time. The fair included business areas, exhibitions, webinars, videos, conferences, prize-giving ceremonies and book trailers – an innovative strategy for the promotion of e-books by means of videos –, as well as the presentation of the new blog of the fair. The 2021 edition will happen in April 12th–15th.