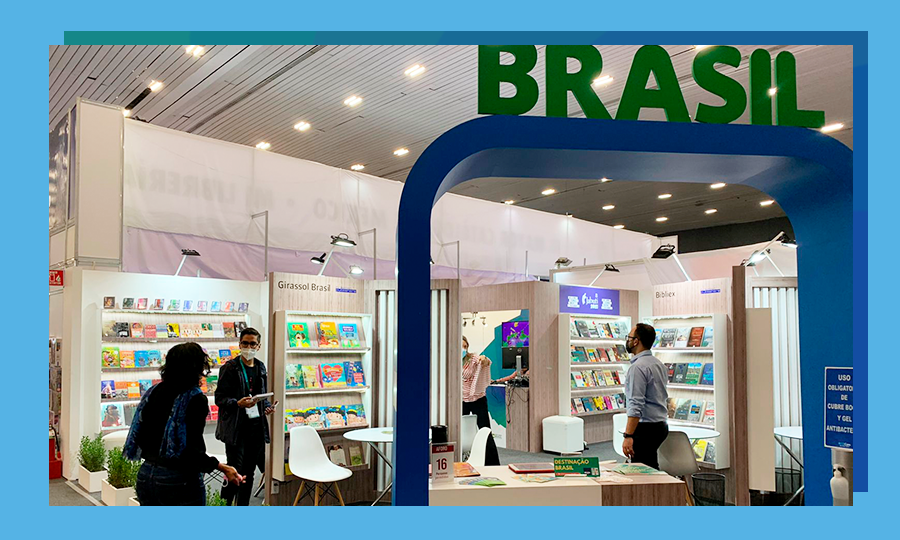 Between November 27th and December 5th, the Guadalajara International Book Fair (FIL) took place. Brazilian Publishers – a project for the internationalization of Brazilian editorial content carried out through a partnership between the Brazilian Book Chamber (CBL) and the Brazilian Trade and Investment Promotion Agency (ApexBrasil) – was present at the event through an exclusive booth, which had the support of the Brazilian Embassy in Mexico, and the presence of publishing houses Girassol Brasil, Callis, Global and Bibliex.

In addition to hosting business meetings and having an exclusive program, the Brazilian space also promoted the sale of books by several Brazilian authors and different publishing houses. During the event, the volume of books sold at the booth surpassed the mark of two hundred copies, all by Brazilian authors, generating direct revenue of approximately five thousand dollars.

Despite having a reduced number of publishers at the booth, due to the pandemic, those present did good business. In an initial calculation, it is estimated that the volume exceeds US$100 thousand, including sales of books, rights and services at the event and for the next 12 months.

The participation of Brazilian authors in the event’s program was the responsibility of the Destinação Brasil project. The writers Claudia Lage, Marcelo Labes, Oscar Nakasato, Tiago Ferro and teacher Tânia Rösing participated in tables and presentations.

“We are very happy for Brazil’s success at the Guadalajara 2021 International Book Fair. This event marked the return to our in-person routine and left us even more motivated for the coming year”, says Fernanda Dantas, executive manager of Brazilian Publishers.

In addition to the fair’s schedule, the Brazilian delegation also had a program full of attractions. On December 28th, the presentation meeting was held by Eduardo Kruel as the new president of the Educational Forum of Latin America, which promotes the value of educational publishing. Kruel is the first Brazilian to occupy the position, which represents all of Latin America. On the same day, there was also a meeting of the Ibero-American Editors Group (GIE), with the presence of Vítor Tavares, president of CBL. There was also a lecture by Tânia Rösing, “Literatura infantil e juvenil: apenas para crianças e adolescentes? (Children and youth literature: only for children and adolescents?), whose theme was “Lectores creativos para siempre: del libro a los juegos electrónicos” (Creative readers forever: from books to electronic games).

On the 29th, there was a dinner to commemorate 125 years of the IPA (International Publishers Association), in which the vice president, Karine Pansa, gave a speech. On the same day, in the business area of the tradeshow, there was the launch of the Spanish version of “Torto Arado” (Twisted Plow), a hit by Itamar Vieira Junior, by the Textofília publishing house.

Another major highlight of the event took place on the 30th: the award promoted by the IPA (International Publishers Association) Prix Voltaire, which honors a person or organization that has made a significant contribution to the defense and promotion of publishing freedom in the world. The ceremony was conducted by Vice President Karine Pansa, who presented the trophy to the winner, Rasha Al Ameer.

Created in 2008, Brazilian Publishers is a sectorial project to encourage exports of Brazilian editorial content, the result of a partnership between the Brazilian Book Chamber (CBL) and the Brazilian Trade and Investment Promotion Agency (ApexBrasil). The initiative aims to promote the Brazilian publishing sector in the global market in an oriented and articulated manner, contributing to the professionalization of publishers.