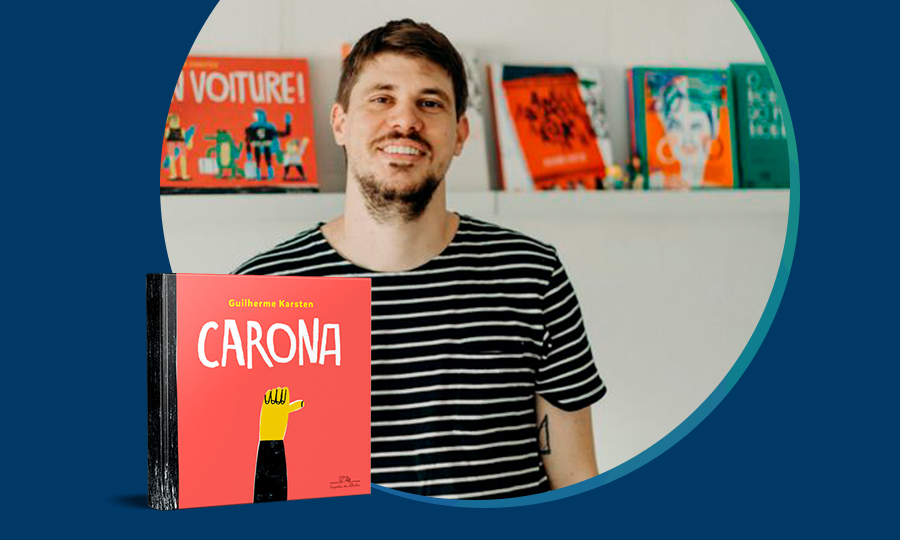 Guilherme Karsten is an illustrator and children’s books author, born in the city of Blumenau, located in southern Brazil. He is also the highlight of this edition of the “Brazilian Authors Series: SDG Book Club special” – a project supported by Brazilian Publishers – a project supported by Brazilian Publishers — a partnership between the Brazilian Book Chamber (CBL) and the Brazilian Trade and Investment Promotion Agency (ApexBrasil).

The writer had his work “Carona” (Ride), published by Companhia das Letrinhas in 2020, selected to appear in the United Nations’ (UN) SDG Book Club Portuguese Language – Chapter Brazil catalogue. The book is included in category 12 of the UN’ Sustainable Development Goals (SDGs): Responsible Consumption and Production.

The title, which won the Jabuti Award 2021 in the illustration category, tells the story of a surfer going to the beach to catch some waves and enjoy the sunny day. Along the way, he encounters a diver, a hero, an alligator and even a thief. In the narrative filled with lively and fun illustrations, the reader will discover how many unusual characters fit in the surfer’s car and the great adventure of the character during the journey to reach his destination.

Karsten has published books in Brazil, Latin America, Europe and Asia. In addition to the audience of small readers, the artist also illustrates books for other writers. Guilherme is the author of several books such as “Aaahhh!”, “Uma Canção” (A song), “Agora!” (Now!), “A Caçada” (The Hunt), among others.

The artist has a consecrated career, having won several awards, including the Jabuti Award 2021, the Vila Velha Bookstore’s New Illustrators contest (2010), the Unesco Cátedra 20 Seal (2017) and the honorable mention in the Planet Tangerine contest in Portugal ( 2017). He was also a finalist for the Nami Concours in South Korea (2018). He was also the only Brazilian awarded at BIB 2019 (Bratislava’s Illustrations Biennial), in Slovakia.