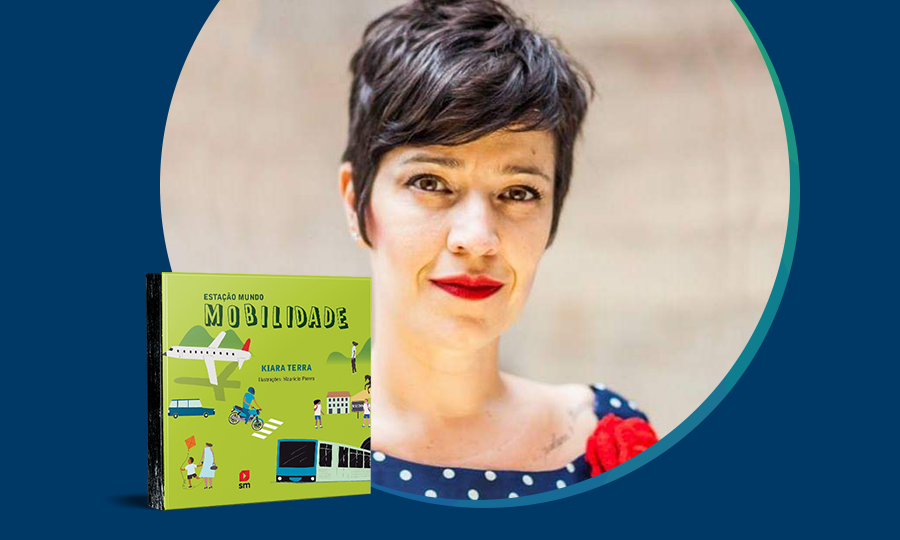 Kiara is a Brazilian writer with a degree in theater from the Célia Helena school and in Communication of Body Arts from PUC-SP, in addition to being a doctoral student in Sociology of Childhood. She is also the highlight of this edition of the “Brazilian Authors Series: SDG Book Club Special” – a project supported by Brazilian Publishers — a partnership between the Brazilian Book Chamber (CBL) and the Brazilian Trade and Investment Promotion Agency (ApexBrasil).

Kiara had her work “Estação Mundo: mobilidade” (World Station: mobility) selected to appear in the United Nations’ (UN) SDG Book Club Portuguese Language – Chapter Brazil catalogue. The book was published by SM in 2017 and is included in category 9 of the UN’ Sustainable Development Goals (SDGs): Industry, Innovation and Infrastructure.

The work is an informative album that addresses citizenship with a focus on human means of locomotion and transport. Through a large map, whose parts are shown on different pages, the reader is encouraged to observe details, perceiving the characters movements and the transformation of the landscape. Therefore, you can identify urban and rural areas, discover different types of traffic signs, have contact with the most different transport means and roads. In this way, the reader is led to reflect on the several ways of spatial orientation and displacement, their benefits and difficulties, depending on people’s place of residence and their lifestyles. More than that, the book invites children to reflect on their own habits and the future of mobility.

Kiara is the author of books such as “A Menina dos Pais-Crianças” (The Parent-Child Girl), published by Ática in 2009, “Hocus Pocus”, from 2012, by Companhia das Letrinhas, and “O Tatu-Bola e a Girafa” (The Armadillo and the Giraffe), published by Estação das Letras in 2012.

Currently, the writer also works as master of ceremonies at congresses, seminars, awards, festivals and other places where it is necessary to establish fertile dialogue and an engaging conduction. The author has already taken stories to the following initiatives: actions such as the appreciation of literature, at Fundação Bunge; Strengthening and visibility of NGOs in favor of children and teenager’s rights, from the Itaú Unicef ​​Award; and the Approved Municipality Seal, also from Unicef.

Since 2010, Terra has also traveled throughout Brazil training educators, through participation in educational congresses and interactive classes. These are meetings whose central theme is “The passion for the word – Reading, writing and narrating in order to belong to the world”.