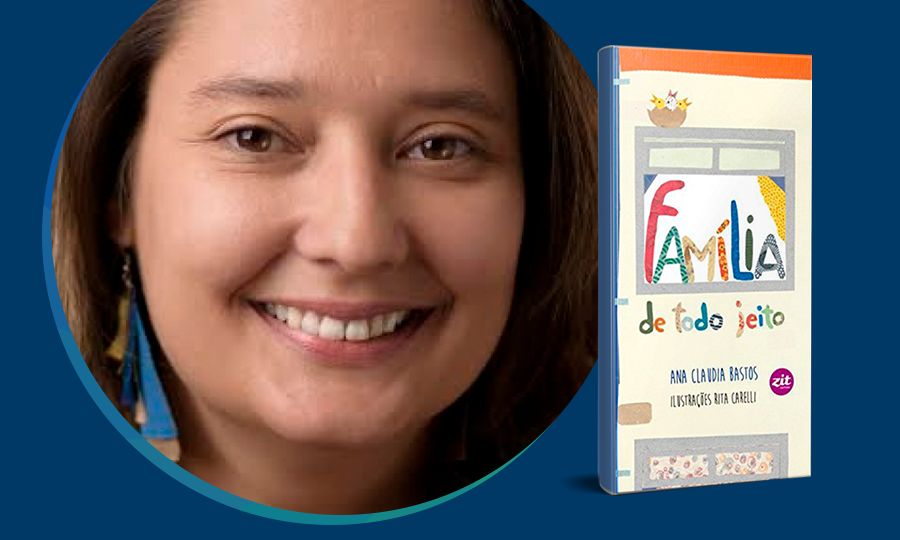 Ana Claudia Bastos is a writer, screenwriter, pedagogue, graduated in social sciences and master in social psychology from PUC-SP, with a specialization in art education from the University of São Paulo (USP). She is also the honoree of this edition of the “Brazilian Authors Series: SDG Book Club Special” – a project supported by Brazilian Publishers — a partnership between the Brazilian Book Chamber (CBL) and the Brazilian Trade and Investment Promotion Agency (ApexBrasil).

The writer had her work “Família de todo Jeito” (Family Anyway) selected to appear in the United Nations’ (UN) SDG Book Club Portuguese Language – Chapter Brazil catalogue. The book was published by ZIT publishing house in 2015 and appears in the Category 3 of the UN’ Sustainable Development Goals (SDGs): Health and Well-Being.

Ana Claudia’s work reminds us, in a very well written text, that there are families in every way and that we should never compare our family to the families of friends and neighbors. The title brings us the idea that what defines a family is the fact that it is a nucleus of people who love each other and share their goods and dreams. Throughout human history, there have been many models of families different from those that inhabit cities today: indigenous families who felt responsible for all the children and elderly people in the village, as well as African families, called clans, in which a man had several wives or one woman had several husbands. The charm of the book is to open readers’ eyes to different family models.

Ana Claudia Bastos is also the author of the titles: “As cores da Floresta sem cor” (The colors of the forest without color), published by Editora Melhoramentos in 2013 and selected to integrate the Bologna Children’s Book Fair catalogue; “Um dia especial para Laurinha” (A special day for Laurinha), also released by Editora Melhoramentos in 2004; and “Um dia na Aldeia Brilho do Sol” (A Day in Sunshine Village), published by Editora Peiropólis in 2005 and product of the research “Temporality, memory and knowledge in the educational practices of Guarani Mbyá villages in Rio de Janeiro” (MAST, UERJ, UFF E UNIRIO) in which the author worked as a technical researcher for the project between 2001 and 2002.