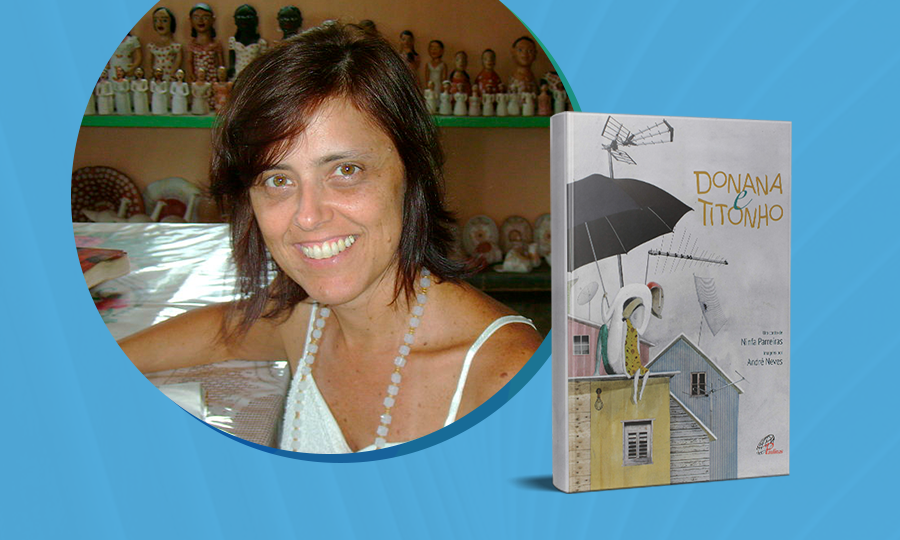 Ninfa de Freitas Parreiras is a psychoanalyst, literature editor and consultant, cultural producer, teacher and Brazilian writer from Itaúna, city in the state of Minas Gerais. She is also the honoree of this edition’s Brazilian Authors Series: SDG Book Club Special, a project supported by Brazilian Publishers — a partnership between the Brazilian Book Chamber (CBL) and the Brazilian Trade and Investment Promotion Agency (ApexBrasil).

Graduated in Literature and Psychology from the Pontifical Catholic University of Rio de Janeiro (PUC RIO), with a Master in Comparative Literature from the University of São Paulo (USP), Ninfa has written about forty books.

The author had her work “Donana and Titonho”, published by Paulinas in 2017, chosen to appear in the Unites Nations’ (UN) SDG Book Club Portuguese Language – Chapter Brazil catalogue. The title was selected in category 1 of the UN’ Sustainable Development Goals (SDGs): Eradication of Poverty.

In “Donana and Titonho” the author neither glorifies nor despises poverty, but narrates the reality of millions of Brazilians, without flourishes. The narrative is told through philosophical poetry and shows the difficulties and sorrows of life in a joyful rhythm through Ninfa’s verses, always extolling hope, but keeping the feet on the ground. The book tells the story of Donana and Titonho, which moves the reader and uses a carefully crafted language and beautiful poetry, cut with the best refinement of Portuguese language and the presence of Brazilianness. The title also has illustrations by André Neves, with strong and sensitive traits, which give voice and life to the narrative and characters.

Parreiras is the author of renowned children’s literature works such as “With the tide and the dream”; “The old woman of coconuts”; “A sea of ​​people”; “Things that arrive, things that leave”; “A roof of heaven” and “The enchanted hill.” Several of her articles on literature and psychoanalysis have been published in diferente countries and in languages ​​such as English, French, Spanish, German and Italian.

Ninfa also has published works in poetry and prose, such as short stories, novels and chronicles. She is also the author of informative non-fiction titles. Her short story “Up There” was published in Spanish in the collection “Cuentos infantiles brasileños” by the Brazilian Embassy in Costa Rica, in 2011, and was also translated into Braille.

The writer coordinates the research group on children’s and youth literature Letra Falante and is a psychoanalyst member of the Iracy Doyle Psychoanalytic Society, located in Rio de Janeiro. She is also a specialist and researcher at the Fundação Nacional do Livro Infantil e Juvenil (FNLIJ), since 1987, and has worked as a teacher at Estação das Letras since 2003. In addition, she works as a psychoanalyst in a clinic for children and adults.

Ninfa was also a member of the Internationale Jugendbibliothek (International Youth Library of Munich, Germany), between 2000 and 2001, with the research “Helplessness in Children’s Literature”.