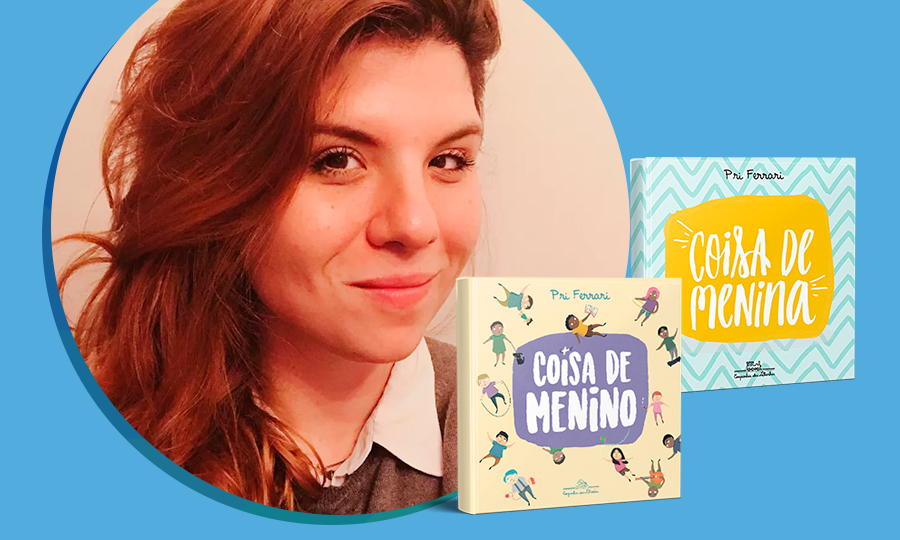 Pri Ferrari is an author, illustrator and publicist from São Paulo. She is also the highlight of this edition of the “Brazilian Author Series: SDG Book Club Special” – a project supported by Brazilian Publishers — a partnership between the Brazilian Book Chamber (CBL) and the Brazilian Trade and Investment Promotion Agency (ApexBrasil).

The writer had two works selected to appear in the United Nations’ (UN) SDG Book Club Portuguese Language – Chapter Brazil catalogue. The books “Coisa de Menina” and “Coisa de Menino”, both published by Companhia das Letrinhas, in 2016, are included in category 5 of the UN’ Sustainable Development Goals (SDGs): Gender Equality. The titles aim to show that every child can be and play with whatever they want, without worrying about stereotypes.

When creating the works, Pri wanted to tell stories and support projects with a positive impact on society: “I had the idea for a long time, it took a few years before I had the courage, the emotional and the logistics to get my hands on it. I believe that we need books and incentive materials that facilitate early childhood education. We need to surround more and more children with examples of female protagonists, black protagonists. Reference is very important for us to create bonds, affection and respect”, says the author who proud of her work.

In “Coisa de Menina”, Pri talks about the concept of what is, after all, a girl thing. The book seeks to show, even in childhood, that there are no rules and that everyone can do anything: there are boys who like to play house, and there are girls who like to build rockets. The title questions the reason for certain patterns of behavior and is for all those who believe in freedom as the best choice ― and who are sure that girls did, do and will do much more.

In “Coisa de Menino” the author is guided by the same principle of her first work, questioning what would be a boy thing. The title reminds us that there are boys who want to be a superhero, football player and astronaut, and others who dream of being rock stars and traveling the world singing for crowds. But all of them may also want to play dolls, cook delicious recipes and take dance lessons. Many boys grow up being told that they cannot act and feel the same way as girls and the book shows us that things don’t have to be that way. The work is for all those who believe that the important thing is to have the freedom to do what they want with their lives.