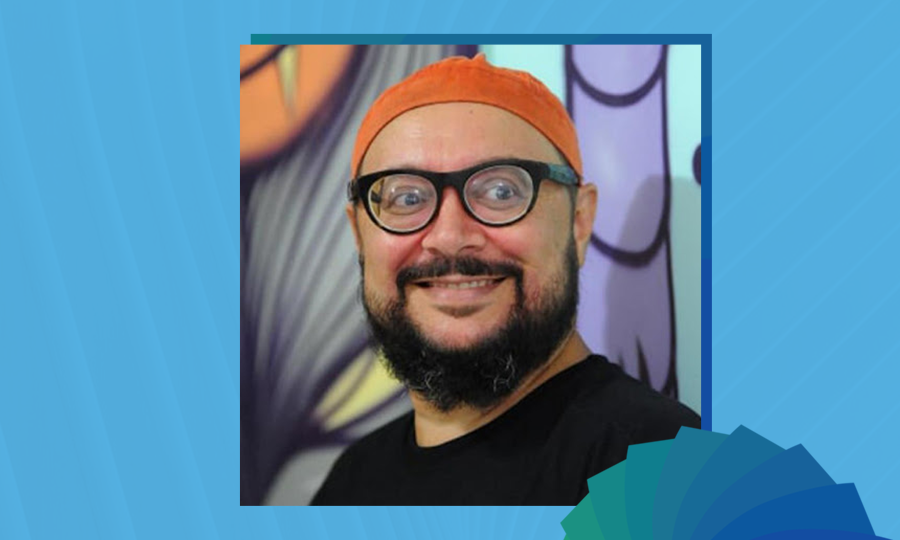 Tino Freitas is a Brazilian writer, journalist and storyteller, in addition to the highlight of the week of the Brazilian Authors Series – SDG Book Club special, which brings together profiles of writers with works selected for this project. The objective of the Book Club is to select content for children and young people from 6 to 12 years old, related to one or more of the 17 Sustainable Development Goals (SDGs) of the United Nations (UN). In Brazil, the club is held with the support of Brazilian Publishers – a partnership between Brazilian Book Chamber (CBL) and the Brazilian Trade and Investment Promotion Agency (Apex-Brasil).

The book “Leila”, written by Tino and published by the publisher Abacatte, entered category five of the SDGs: Gender equality. In the work, a whale named Leila is harassed by a Baron who, against her will, kisses her, whispers seductions, asks for her to keep it secret, and even cuts her hair. Silent and petrified, terror takes hold of her, and she gives up swimming, but helped by her friends, she regains her essence and her voice, putting an end to the aggressor’s threats.

This work is cataloged in the category of gender equality because it represents a narrative that challenges all forms of discrimination against women and girls. According to the SDG, it is proven that empowering women has a multiplier effect and contributes to economic growth and development.

Tino is also a reading mediator for the Roedores de Livros (Book rodents) project in the Federal District. The project was awarded in 2011 by the National Foundation for Children’s Books and Youth as the Best Reading Incentive Program for Children and Youth. And he also participated in a Brazilian Publishers webinar in 2020, talking about partnerships between illustrators and writers during the Frankfurt Book Fair. Check out the video recording here .

The author has published more than  20 books. His works are characterized by humor, social criticism and the experiment with supporting materials – paper/sheet/book object – as an important conducting element of the narrative. Some of his books have already been published abroad: “O Livro das Bolhas de Sabão” (The book of soap bubbles) (2012) was published in Taiwan, by Grimm Press, as an interactive work that contrasts the use of tablets and proposes something more rustic, with children playing with paper; “Com que roupa irei para a festa do rei?” (What will I wear to the king’s party?” (Editora do Brasil), published in Argentina in 2019 by Gerbera Ediciones; and “Quem quer brincar comigo?” (Who wants to play with me?) (2011), which arrived in Portugal by the publisher Faz de Conto.

Some of its titles have already received important awards, such as the Jabuti Award and the Highly Recommended Seal for Children, from the National Foundation for Children’s Books and Youth (FNLIJ). In addition, works by Tino have already been part of prominent selections, such as the DISTINCTION Seal from the UNESCO Book Chair in PUC-RIO, The 30 Best Books of the Year, from the Crescer Magazine, the National School Library Program and the National Book and Teaching Material Program and the Bologna Catalog.

About the Brazilian Authors Series

Seeking to encourage knowledge about contemporary Brazilian literature, Brazilian Publishers, a project for the internationalization of Brazilian editorial content carried out through a partnership between the Brazilian Book Chamber (CBL) and the Brazilian Trade and Investment Promotion Agency (Apex-Brasil), created the series “Brazilian Authors”, which brings information about current national writers.

About the SDG Book Club

It is a project created by the United Nations (UN) with the support of the International Association of Publishers (IPA), and is related to the Organization’s Sustainable Development Goals (SDGs). Its aim is to use books as a tool to encourage children aged 6 to 12 to interact with the principles of the SDGs. How? Through the dissemination of a list of works from various parts of the world and that address themes linked to the SDGs.

Created in 2008, Brazilian Publishers is a sectorial project to encourage exports of Brazilian editorial content, the result of a partnership between the Brazilian Book Chamber (CBL) and the Brazilian Trade and Investments Promotion Agency (Apex-Brasil). The initiative aims to promote the Brazilian publishing sector in the global market in a targeted and articulated manner, contributing to the professionalization of publishers.