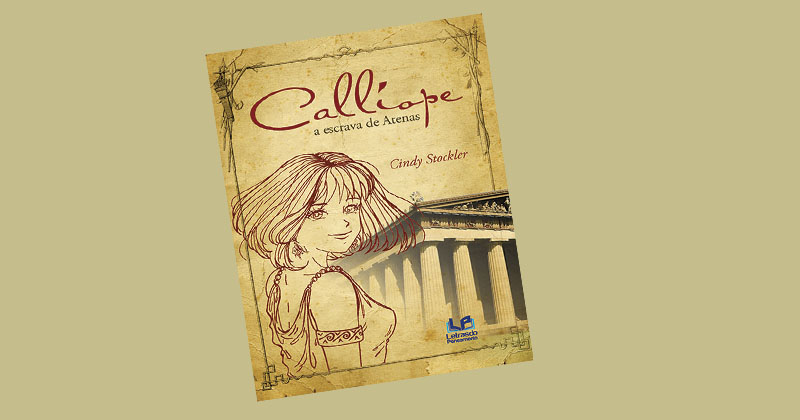 The Brazilian author Cindy Stockler is appointed as an honorary member of the National Association of Greek Authors. The invitation was made thanks to the impact of her book “Callíope, a Escrava de Atenas” (Calliope, the Slave of Athens), released on October 21st in Greek by the publisher Okeanos Ekdossis. The work was widely accepted by literary critics and journalists in Greece and the writer already has events scheduled in Athens for March 2020.

In Brazil, Callíope had its first edition published in 2004 and the second edition in 2017, both by the publisher Letras do Pensamento, one of the companies member of the Brazilian Publishers, an industry project fostering exports of Brazilian editorial content through a partnership between the Brazilian Book Chamber (CBL) and the Brazilian Trade and Investment Promotion Agency (Apex-Brasil).

It was through the 2017 Frankfurt International Book Fair that the work called international attention when the Greek publisher Okeanos Ekdossis became interested in the novel.  “When the book was published in Brazil, I thought to myself that hardly a Greek publisher would be interested in publishing it since they would say rolling their eyes: there comes another foreign author writing about Greek antiquity”, jokes Cindy. But to her surprise, Calliope’s story took a different way.

From the meeting in Frankfurt, the contacts between Cindy and the foreign publishing house evolved, and two years later the book took the author’s name to Greece. Still fresh on the shelves, Calliope had previously been read by some literary critics of major Greek newspapers and cultural sites. What drew the attention was the novel to be set in ancient Greece, during the century called “Golden Century”.

Cindy tells that she found the exact date when she wanted the story to happen only after diving into the world of books, encyclopedias, maps, websites, everything she could reach about Greek history. “My office got a mess, with all there over tables and chairs, and even on the floor, open on pages I needed to search all the time. I researched in the old classical writers about people’s behavior, their homes, their way of speaking and living, and then the moment came when I began fiction”, she reports.

The work travels back in time to 2,500 years ago to tell the story of Calliope, a young woman sold as a slave at the time of the Peloponnese War (431 to 404 B.C.), also known as the Ancient Greek World War. Cindy’s research was so intense and thought-provoking that the publisher Letras do Pensamento decided to insert it in full into the book, in the form of a numbered appendix, for readers who are attracted by historical details.

“So the fictional novel takes the reader through the streets of Athens 2,500 years ago, with the setbacks in the life of young Calliope, who becomes a woman and has so many challenges to face. The reader most interested in the historical facts, which are mentioned as they happen, may, in the appendix, learn a little bit more”, concludes the writer.

Created in 2008, the Brazilian Publishers is an industry project fostering exports of Brazilian editorial content through a partnership between the Brazilian Book Chamber (CBL) and the Brazilian Trade and Investment Promotion Agency (Apex-Brasil). The purpose of the initiative is promoting the Brazilian publishing sector in the global market in an oriented and articulated manner, contributing to the professionalization of publishing houses.