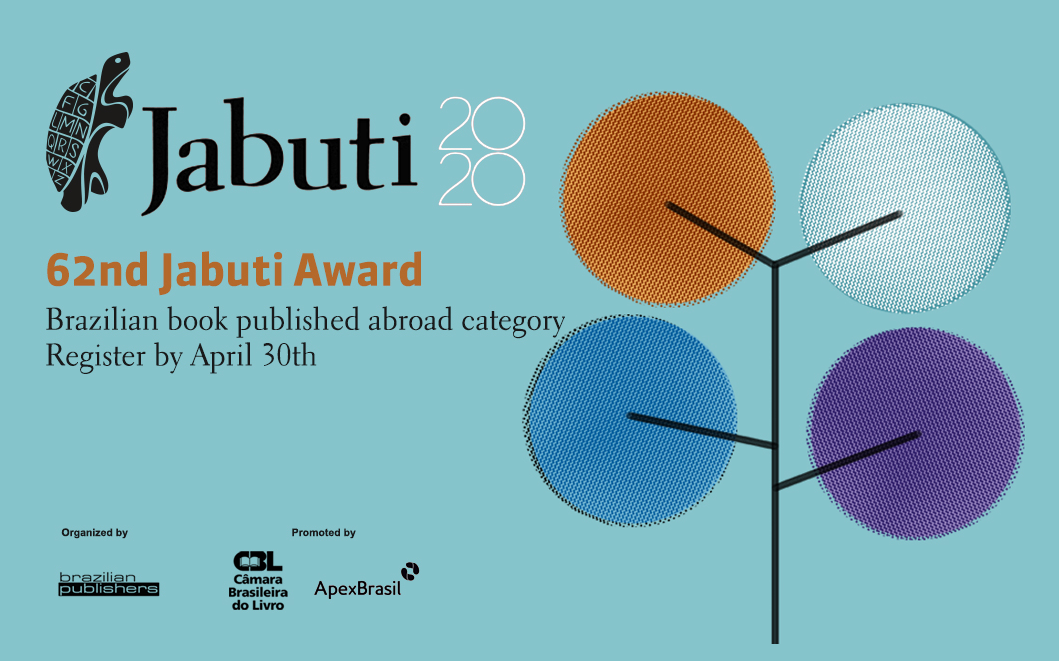 The Jabuti Award, the most important book award in Brazil, is now open for registration from international publishers that have published books written by Brazilian authors, whether born in Brazil, naturalized or foreigners who are permanent residents in the country. The period to submit the registrations goes until April 30th. This is the 62nd edition of the award that is organized by the Brazilian Book Chamber (CBL). The ceremony will take place in September in the city of São Paulo.

The “Brazilian Book Published Abroad” category was created in 2017 as part of the efforts of Brazilian Publishers – an industry project developed as a partnership between CBL and the Brazilian Trade and Investment Promotion Agency (Apex-Brasil) – to foster exports of Brazilian editorial content.

According to Fernanda Dantas, Executive Manager of Brazilian Publishers, the Jabuti Award represents the recognition of the quality of the work of the winners by Brazilian critics and the publishing industry. “It’s a way of honoring international publishers who bet on our literary production. Last year, Scottish publishing house Charco Press was the winner in such category. For this year we expect to have new participants among the nominees”, she explains.

For the 2020 edition, it was created the Entertainment Novel category, which will be awarded to Brazilian fiction writers who are usually disregarded for literature prizes. Now the Jabuti Award totalizes 20 categories, one more than in the previous year.

“This new category reinvigorates the award and puts it in tune with what has been going on and produced in the publishing industry, and, above all things, it brings innovation. This is how the Jabuti Award goes beyond the academic world and gets closer to readers. Our intention when creating this new category was to acknowledge the work of Brazilian fiction writers, so that they become as popular as Tolkien (fantasy), Mary Shelley and Bram Stoker (horror), Jules Verne (adventure), Charlotte Brontë and José Mauro Vasconcelos (sentimental novels) and Agatha Christie (mystery)”, points out Pedro Almeida, award’s curator.

As in the last edition, the Jabuti Award is divided into four areas: Literature, Essay, Book and Innovation. However, some changes were made so that the award could be more comprehensive.

The Humanities category, for example, was divided into Human Sciences and Social Sciences. Such reorganization was made because this category includes a large group of very different themes. Also, the category was, in the past two years, the one with the highest number of entries, what made the work of the members of the judging panel for such category harder than for the other categories.

The traditional Novel category is now renamed as Literary Novel, while the Printing category was removed, since CBL thinks we already have a very important award for the printing industry: the Fernando Pini Awards for Printing Excellence.

Another novelty in this edition is that the ceremony, which used to happen in November, will take place in September this year, and CBL is expected to disclose the place and date soon.

After having paid homage to Conceição Evaristo in its previous edition, this year a tribute will be paid to writer Adélia Prado. In 1978, her poetry book entitled “O Coração Disparado” (The Headlong Heart) was given a Jabuti Award, and soon after it was published in other countries. Since then Adélia has won several national and international prizes, including the Griffin Poetry Prize, the most important Canadian award in such genre. Her talent has been acknowledged and her books are matter of study in universities from all parts of the world.