“Not even the 80s lasted as long as the nostalgia for it”: Samir Machado de Machado talks about his inspirations to write Tupinilândia (Tupinland) 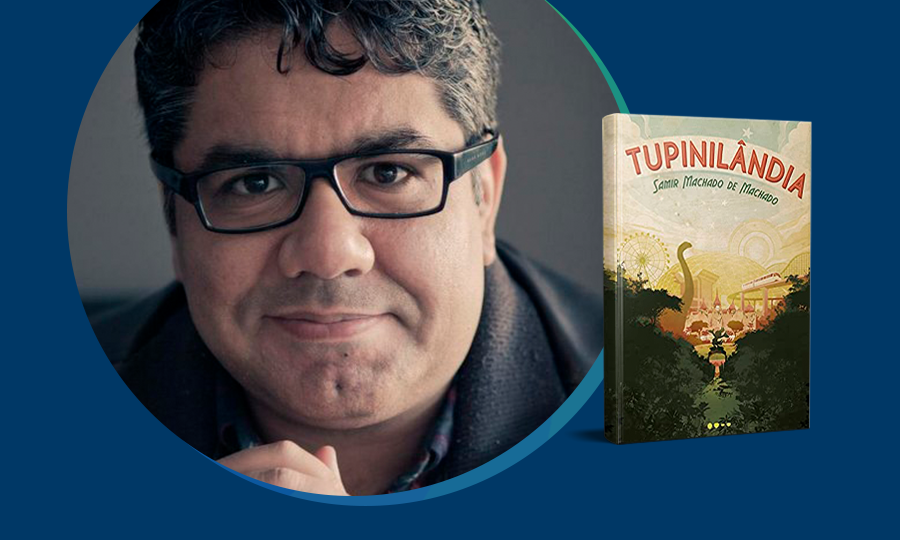 Pop references from the 1980s, comics, adventure films, colonialism, and Brazilianness. The result of this veritable melting pot is the best-selling “Tupinilândia” (Tupinland), published in Brazil in 2018 by the publisher Todavia. The work is by the writer, editor, and graphic designer from Rio Grande do Sul, Samir Machado de Machado.

The book was copyrighted by the French publisher Métailié and won the Jabuti Award 2021  in the Brazilian Book Published Abroad category, promoted by Brazilian Publishers — a project for the internationalization of Brazilian editorial content carried out through a partnership between the Brazilian Book Chamber (CBL) and the Brazilian Trade and Investment Promotion Agency (ApexBrasil). In an interview with the Program’s website, Samir told a little about the mixture of references that inspired him and the award-winning French edition.

In the title, the author explores themes such as nationalism, memory, and nostalgia. The work is set in the 1980s, in the heart of the Amazon jungle, and is about a city and an amusement park, both of which have the same name as the book. The story is full of fantastic elements and references to Brazilian reality.

Samir says that two desires inspired him to write the novel, the desire to narrate an adventure about a lost city and the desire to reflect on the pop culture of the 1980s from the Brazilian perspective — a country in economic crisis and lacking democracy, being bombed by the values of American consumer culture.

“It was also an anthropophagic way of dealing with my childhood obsessions: Spielberg movies, Michael Crichton books, Carl Barks comics, and the sometimes naive, sometimes misguided ideas that people had in the 1980s of what the future would be like. It’s also a way of exorcising my own fixation with that era. I usually say that not even the 1980s lasted as long as the nostalgia for it”, explains Samir.

Adventure is a genre of universal interest, which makes the work attractive to the international market and to European readers. The book works as a collection of memorabilia from 20th century Brazilian culture, without forgetting issues that are present in the country, such as the tendency to authoritarianism, the self-destructive relationship with the Amazon, and the population’s ability to adapt to the most absurd situations possible.

“The book seeks to reflect on the colonialist essence present in the adventure, in addition to the progressive, and at the same time harmful, impact of the cultural colonization that occurs by the North American consumer culture, a phenomenon that is also universal”, quotes the author.

Samir feels honored with the work’s victory in the Jabuti Award and highlights the exceptional work done by Métailié in relation to “Tupinilândia” (Tupinland), which did well commercially in France. The publisher has decades of experience with Brazilian works and is known for the excellent quality of its curation. Regarding the novel’s good performance in the foreign market, Machado hopes that the publication will help the book find an increasing number of readers, and that, through his work, more people will become interested in Brazilian culture and literature.

Furthermore, Samir is extremely satisfied with the partnership with Métailié. “The work was wonderful, down to the power of synthesis when it came to promoting the book. The tagline referencing Jurassic Park and George Orwell was the kind of thing that made me say ‘how did we not think of this before? It was there since the beginning!'” he jokes. The author refers to the sentence found on the cover of the French edition: “Between Orwell and Jurassic Park, a literary blockbuster”.

Samir also liked the French translation. “Hubert Tézenas’ work was excellent. It was a great idea to add footnotes, explaining Brazilian things, such as brigadeiro, xis coração, brizolistas, and the hidden references to Jorge Ben Jor’s music. It took a foreign perspective for me to realize its specificity,” says the Southern.

Machado has a degree in publicity and advertising from the Pontifical Catholic University of Rio Grande do Sul and in literary creation from the same institution. In 2007, he founded his own publishing house, “Não Editora“, in which he published works such as “O Professor de Botânica”(The Botany Professor) and “Quatro Soldados”.(Four Soldiers) The author won the Açorianos Literature Award three times, in the Cover category: in 2009, for the book “Raiva nos Raios de Sol” (Rage in the sun rays) ; in 2013, for “Monstros fora do Armário” (Monsters out of the closet) , and in 2014, for “Quero ser Reginaldo Pujol Filho” (I want to be Reginaldo Pujol Filho) . All books were published by Não Editora. He also won the same award in 2017 in the Long Narrative category for the work “Homens Elegantes” (Elegant Men), published by Rocco.

Created in 2008, Brazilian Publishers is an industry-wide project that promote exports of Brazilian editorial content, the result of a partnership between the Brazilian Book Chamber (CBL) and the Brazilian Trade and Investment Promotion Agency (ApexBrasil). The purpose of the initiative is to promote the Brazilian publishing industry in the global market in a guided and articulated way, contributing to the professionalization of publishing houses.