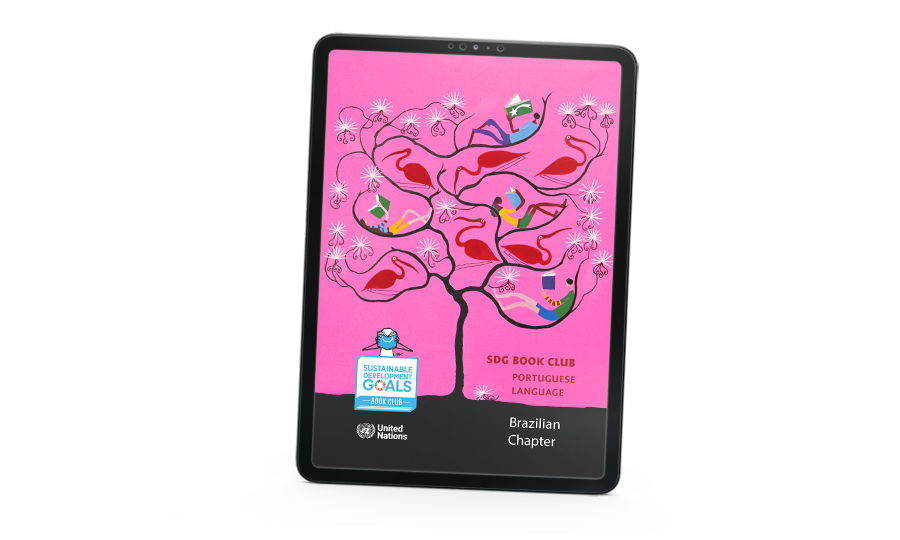 The SDG Book Club Portuguese Language has just disclosed the catalogue “Capítulo Brasil)” (Chapter Brazil). The material, developed in Brazilian Portuguese and English, brings together information about the 175 titles selected for the club.

Digital publication, available free of charge on the sites of the Book Club partners, is a proposal for the project to support the work of educators and librarians, main readings mediators of the titles with children and young people.

The SDG Book Club Portuguese Language is held by the Brazilian Book Chamber  (CBL), the National Foundation of Children’s and Youth Book (FNLIJ), Brazilian section of iBBY, and the Brazilian Federation of Librarians, Information Scientists and Institutions Association (FEBAB). For the catalogue, the project was supported by Brazilian Publishers – the Brazilian Editorial Content Internationalization Program developed by CBL in partnership with the Brazilian Trade and Investment Promotion Agency (ApexBrasil).

The books presented in the material were all published in Brazil, in the Brazilian Portuguese language, in the period between the January 1, 2016 and October 30, 2020. The works are focused on children and young people, six to twelve years, and function as a reading reference on the topics of UN Sustainable Development Goals.

The illustration of the catalogue’s cover was donated by the author of art, Roger Mello, for FNLIJ. The graphic project was signed by the Versalete studio. In the material, the titles are grouped and presented by SDG. At the end of the 17 chapters, there is also a list of the names of the writers, the illustrators, the translators and editors of the books.

The universe of the titles that are included in the SDG Book Club Portuguese Language was constituted from the subscribers on the CBL website, on a platform created especially for the project. Of the 1,111 titles registered, 986 were considered eligible to participate.

FNLIJ / IBBY Brazil, national and international reference for its work, pioneer in Brazil, valuing the children’s book and juvenile of quality, was responsible for the process of selecting the works. The individual reading and the analysis of each book, the exchange of observations in the subgroups and in the larger group, were characterized by an intense engagement of the experts in the proposal of the Book Club.

The complete list with those selected, in addition to appearing on the club’s site, also figures on the UN page, as a reading reference on the SDG

According to Vítor Tavares, president of the Brazilian Book Chamber, the club awakens curiosity in children and adolescents to know more about the SDG, and expand their reading repertoire. “The club titles are incredible and make up a complete collection. It is with pride that we launch this catalogue and spread Brazilian literature with even more force, “adds Vitor.

“With this catalogue we will have greater ease to disseminate the works with libraries in order to contribute to the training of citizens capable of living in a society aligned with sustainable Development Goals, even after 2030,” says Jorge Moisés do Prado, president of FEBAB (Brazilian Federation of Librarians, Information Scientists and Institutions Association).

Elizabeth Serra, FNLIJ’s General Secretary, adds: “The literature, like all the arts, is vector of change, which all have the right to know and enjoy. Brazil is extremely rich in literature and this work will yield wonderful fruits, not only for the country, but to the world. ”

The catalogue is available in English and Brazilian Portuguese on the SDG Book Club site and also on the sites of the CBL, FNLIJ, Febab and Brazilian Publishers.

About the SDG Book Club

It is a project created by the United Nations (UN) with the support of the International Publishers Association (IPA), and is related to the Organization’s Sustainable Development Goals (SDG). It’s goal is to use books as a tool that encourages children between six and 12 years to interact with the principles of SDG. How? By disseminating a list of works from various parts of the world and approaching topics linked to SDG.

Created in 2008, Brazilian Publishers is a sectoral project for the Brazilian editorial content exports, a result of the partnership between the Brazilian Book Chamber (CBL) and the Brazilian Trade and Investment Promotion Agency (ApexBrasil). The initiative aims to promote the Brazilian publishing sector in the global market in an oriented and articulated manner, contributing to the professionalization of publishers.