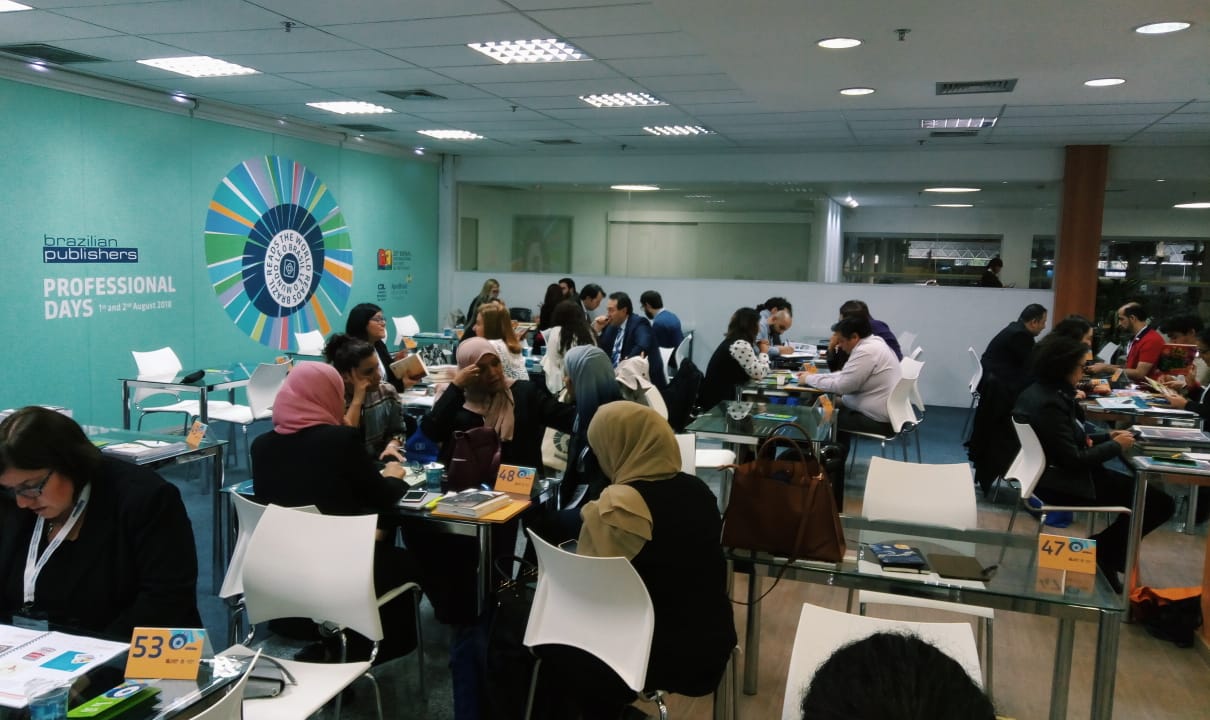 The 25th São Paulo International Book Fair took place from August 3rd to 12th and hosted the 1st Professional Days, with the participation of 58 professionals from the publishing market, 30 invited international publishers and 28 Brazilian publishers supported by the Brazilian Publishers project. The meetings generated US$ 735.900 thousand in expectation of business closed and estimated for the next 12 months.

The event of business and matchmaking was promoted by the Brazilian Book Chamber (CBL) with the support of the Brazilian Publishers, a project to foster exports of Brazilian editorial content through a partnership between the CBL and the Brazilian Trade and Investment Promotion Agency (Apex-Brasil).

During the two days, national and international players gathered to negotiate the purchase and sale of books and copyrights. Besides Brazil, among the countries present were Argentina, Colombia, Turkey, Mexico, Peru, Guatemala, Panama and the United Arab Emirates. Check the list of participating publishers by clicking here.

The manager responsible for the Brazilian Publishers Project at Apex-Brasil, Isabel Fontoura, affirms that the professional day was important to expand the business between the national and international publishing market. “One of our main strategies to export promotion and investment attraction is to increasingly strengthen events in Brazil, so that they can become international business platforms. We find extremely significant this initiative of Brazilian Publishers to use a renowned event, such as the São Paulo International Book Fair, to generate more global opportunities, bringing 30 international publishers to know the Brazilian works”, he said.

“The Professional Days brings another international approach to the agenda of the São Paulo Book Fair opening space for B2B business and exchange of experiences among executives from different markets. This first edition was very useful as source of business, cultural exchange and learning, as well as being the beginning of a path to put Brazil in the official international calendar of the book,” explains the International Affairs Manager of CBL and Manager of Brazilian Publishers, Luiz Alvaro Salles Aguiar de Menezes.

Business closing and exchange of ideas

According to Talal Salim of Jumeirah Publishing & Distribution, the meeting among the editors brought business perspectives, including the use of the Translation Fellowship of the Brazilian Publishers. “The Professional Days was very good. We met not only Brazilian publishers, but also publishers from other countries. I hope that the relationship between the Brazilian and Arab publishers can intensify in the future. We have had good meetings, we will try to close deals and also use the Translation Fellowship, which is an incredible opportunity to have Brazilian books translated to the Arab world”, he said.

Luis Jorge Arnau, from Editorial Parallel 21, explains that he took great advantage of the two days to strengthen ties with the Brazilians. “Many people in Mexico know Jorge Armado, but few have contact with current Brazilian writers. I have approached some editors and I believe that the possibilities of working together in publishing of Brazilian books in Mexico and vice versa are great. The round was very good. I held 14 meetings in two days, and they were all amazing”, said.

For Brazilian publishers, being in contact with such a large group of professionals from other countries without leaving Brazil is a great opportunity. “We have a strong project of internationalization focused on Latin America, since our characters are very close to the children of the neighboring countries. With the round of business and participating in the fairs, we can understand more about the market abroad and prospect projects”, details Lourdes Galiano, of Mauricio de Sousa Produções.

With the objective of expanding the national publishing market and bringing Brazilian readers closer to the Arab literature, this year edition of the Book Fair also received Sharjah as the guest of honor. The city-state is the cultural capital of the United Arab Emirates, elected by UNESCO as the book world capital in 2019. The Brazilian Publishers interviewed Ahmed Al Ameri, President of the Sharjah Book Authority. Check his expectations for the event by clicking here.

With R$ 32 million investment, the 25th São Paulo International Book Fair had 1,500 hours of activities, 14 official spaces of the event with activities related to the literary universe, 197 exhibitors and the presence of 291 national and 22 international authors.