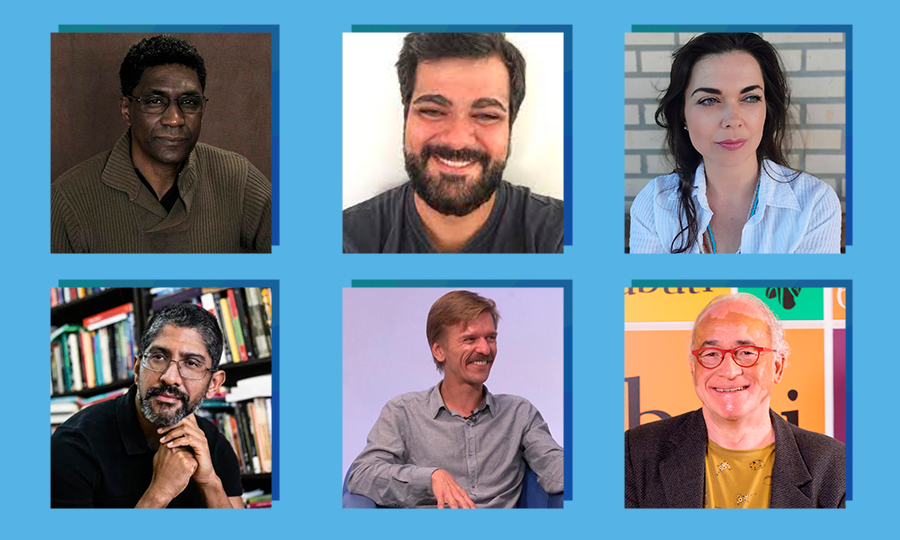 In 2021, Brazilian literature gained worldwide notoriety with new translations and international launching of titles already known by Brazilian readers. In Brazil, even with the pandemic, the ceremonies for the main literary awards in the country continued and has brought recognition for a few names that haven’t popped in the mainstream media yet.

The Brazilian Publishers — An Internationalization Program for the Brazilian publishing market, carried out through a partnership between the Brazilian Trade and Investment Promotion Agency (Apex-Brasil) and the Brazilian Book Chamber (CBL), — selected some of the authors awarded with the Jabuti Award, the Oceanos Award, the São Paulo Prize for Literature, and the Machado de Assis Prize from the National Library.

Check the list below including six Brazilian authors and their respective award-winning literary works to not lose sight of in 2022.

João Luiz Guimarães and Nelson Cruz were the great winners of the greatest prize in Brazilian literature, the Jabuti Award. The duo’s book, “Sagatrissuinorana” (Sagatripigrana), was the highlight of the 63rd edition of the award, which won the Book of the Year and Children’s Literature categories.

Launched by Ôzé Editora, its title is a reinterpretation of the fable “Os Três Porquinhos” (The Three Little Pigs), and a tribute to the writer Guimarães Rosa and the victims of the dam failures in the cities of Brumadinho and Mariana, in Minas Gerais. The writing style of Guimarães Rosa is used in this book to retell the story creating a parallel with the tragedies that occurred in Minas Gerais.

João is a writer, journalist and scriptwriter from Rio de Janeiro. Winner of the Jabuti Award and the Off FLIP Award, his literary works are focused on children and youth audience. Nelson is a plastic artist, cartoonist, writer and illustrator born in Belo Horizonte. He started to work in the publishing market in 1988, having made illustrations for dozens of books of various publishing companies.

Jefferson Tenório, on the other hand, won the statuette in the Literary Novel category.  “O Avesso da Pele” (The Flipside of Skin), published by Companhia das Letras, revolves around Pedro, who narrates the story of his father Henrique, killed in a police approach. The work deals with profound themes such as blackness, violence and family relationships.

This is Jefferson’s third book published. The author started in literature in 2013, with the title “O Beijo na Parede” (The Kiss On The Wall), about material and affective needs of those who live in the contemporary metropolis, and in 2018 he launched “Estrela Sem Deus” (Godless Star). The work also approaches racial matters and precocious maturation of young black people.

In 2021, the Brazilian writer and professor Edimilson de Almeida Pereira was awarded by two great awards: the Oceanos Award and the 14th Edition of the São Paulo Prize for Literature.

The novel ‘‘O Ausente’’ (The Absent), published in Brazil by Editora Relicário, won the second place in the Oceanos Award. The book is the first volume of the trilogy ‘‘Náusea’’ (Nausea), that also includes ‘‘Um Corpo à Deriva’’ (A Drifting Body), published by Edições Macondo, which was a semifinalist in Oceanos Awards, and ‘‘Front’’ (Front), by Editora Nós. The last was the winner of São Paulo Prize for Literature in 2021. This work is set in a rural and intimate atmosphere, in addition to approaching the mystic. Built in a flow in which nothing is determined, not even the character’s name, the narrative breaks boundaries between prose and poetry and innovates in language and infinite possibilities for using it.

Pereira is a poet from Minas Gerais, author of dozens of books and articles, and Full Professor of Brazilian Literature at the Bachelor of Arts in Language and Literature of the Universidade Federal de Juiz de Fora (Federal University of Juiz de Fora). He is also a great researcher of African Brazilian culture and religiosity. His book “Front” is narrated in poetic prose and tells the story of a man raised among rubbles in a city full of violence and hostility.

Morgana Kretzmann also was a highlight of the São Paulo Prize for Literature, winning the ‘‘Best Starting Novel of 2020’’, with her book ‘‘Ao Pó’’ (To the Dust), by Editora Patuá. Born in the city of Tenente Portela, in Rio Grande do Sul, Kretzmann is an actress, scriptwriter and cultural producer with regional and international awards in her curriculum.

The writer from the South, now living in São Paulo, has also a degree in Environmental Management from the Instituto Federal de Santa Catarina (Federal Institute of Santa Catarina). ‘‘Ao Pó’’ is her first novel and tells the story of a woman who suffered childhood abuse and seeks to face her demons on the stage.

The writer from Santa Catarina was the first to be included in the Novel category of the Machado de de Assis Prize, from the National Library. The poet, prosaist and writer born in Blumenau was awarded for the book ‘‘Três Porcos’’ (Three Pigs), published by Editora Caiaponte, which also won the São Paulo Prize for Literature in 2020.

In ‘‘Três Porcos’’, Marcelo narrates the story of Rafael, a man who deals with a failed marriage and enters into a spiral of violent memories, which provoke the beginning of an intense reconstruction journey of his trajectory as a man. The work is written in a rowdy and violent prose, showing the difficulties and the burden of the concept of masculinity in its most varied and cruel forms.

Marcelo is the author of the poetry book “Enclave” (Enclave), published by Patuá in 2018 and a finalist for the Jabuti Award in 2019, and the novel “Paraízo-Paraguai” (Paraízo-Paraguai), published by Editora Caiaponte in 2019, a work that reached the second place in the Machado de Assis Prize from the National Library Foundation.

Created in 2008, Brazilian Publishers is a sectoral project to encourage trades of Brazilian editorial content, the result of a partnership between the Brazilian Book Chamber (CBL) and the Brazilian Trade and Investment Promotion Agency (ApexBrasil). The initiative aims to promote the Brazilian publishing sector in the global market in an oriented and articulated manner, contributing to the training of publishing companies.