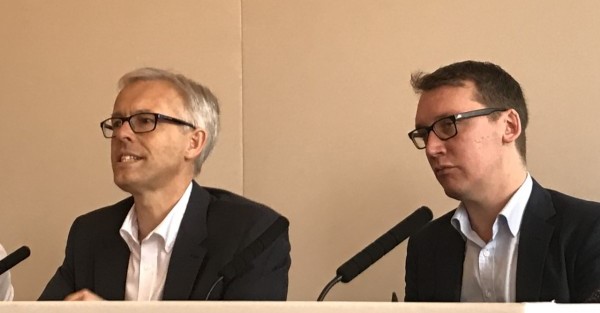 HarperCollins ceo Charlie Redmayne intervened from the floor at LBF’s packed debate on the impact of Brexit to reveal that Polish workers in Harper’s Scottish outposts were “going back home” as uncertainty over whether they would be allowed to stay in the UK post-Brexit mounted, and their earnings were hit by the falling pound. The departures were “impacting on the costs, efficiency and viability of that business” now. “Not giving security on residency will impact UK businesses and jobs,” Redmayne said.

Rosa Wilkinson, director of stakeholder engagement for trade policy at the Department for International Trade, one of the key civil servants delivering Brexit, described the situation as “a perfect storm”, and added that on freedom of movement, “no one has ever said that everyone is going to get kicked out”. She added that “we are working on it”, and that concerns from business over the status of European workers were “at the top of the tree, absolutely understood”.

DK ceo Ian Hudson, on the panel, revealed that out of 500 DK staff in the UK, 81 held European passports, and the failure of prime minister Theresa May to guarantee a right to remain to European staff was “inhuman”. He added later that the Government “had a responsibility not just to agree with populist demands” over freedom of movement. “I want the right to be able to offer a job to someone in UK publishing wherever they are from.”

Hudson added that the weaker pound, prompted by Brexit, had “significantly increased” the cost of printing overseas and maintaining DK’s overseas offices. He described the impact of currency fluctuations as “unhelpful” given that his customers could be committing to books up to 18 months ahead.

Other concerns raised at the debate included copyright and IP protection; maintaining low trade barriers; and EU funding for scientific research. Hudson said that on the “fundamental issue” of copyright and piracy, “The loss of our seat at the EU table is a backward step.”

PA chief executive Stephen Lotinga, chairing the debate, pointed out that 30,000 jobs in publishing were affected by Brexit, and that 43% of the UK’s £4.5bn publishing sector’s trade came from overseas.

As the debate ended, Lotinga called for a show of hands from the 100-plus audience: not a single person felt that Brexit would be good news for British publishing.