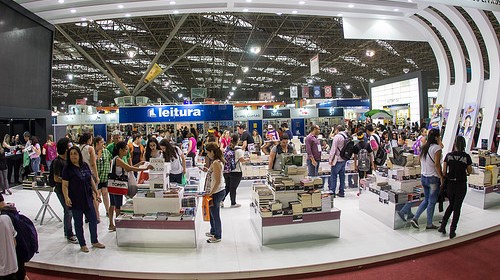 From August 3rd to 12th, the largest literary meeting in Latin America takes place at the 25th São Paulo Book Fair. The event is promoted by the Brazilian Book Chamber (CBL) and is supported by Brazilian Publishers, an internationalization project promoted by CBL in partnership with the Brazilian Trade and Investment Promotion Agency (Apex-Brasil). The São Paulo Book Fair gathers publishers, bookstores, and national and international distributors, in addition to a wide cultural program.

During ten days, the visitors will have contact with national and international authors, in exclusive chats and lectures. One of the main highlights is the “BIC Cultural Arena”, a space with capacity for 400 people that have already received names such as Harlan Coben, Cassandra Clare, Lucinda Riley and Kiera Cass. Check out below the Brazilian and international authors already confirmed:

A. J. Finn: he is a former literary critic and has written for several publishers, including Los Angeles Times, The Washington Post and The Times Literary Supplement. “The Woman in the Window”, his first novel, was sold to 36 countries and is being adapted for the cinema in a great production of 20th Century Fox. Born in New York, Finn lived for ten years in England before returning to his hometown, where he currently resides.

Charlie Donlea: he lives in Chicago with his wife and two small children. One of his hobbies is fishing in virtually deserted places in Canada. These journeys through paradisiacal roads inspired the setting for his debut book. An avid reader is also passionate about music, movies, serials, and sports. When he decided to write his first book, he prepared himself to produce something like everything he likes to find in his favorite movies and books: a story that will let the reader think about it long after doing it.

David Levithan: author and publisher of Young Adult literature, David Levithan has a characteristic writing that mixes gentleness, humor, and sensitivity into tangles with characters of all kinds, colors, genres, and sexualities. With the theme LGBTQ+ as flagship, his works are published in Brazil by Editora Galera.

Lauren Blakely: The New York Times bestselling author and #1 from Wall Street Journal is known for her contemporary novel style which is hot, fun and sexy. She lives in California with her family and planned entire novels while walking with his dogs. With fourteen New York Times bestsellers, she has sold more than 2.5 million books. Her work has been translated into eleven languages.

Marissa Meyer: the author lives in Tacoma, Washington, with her husband and two cats. She has been a fan of many nerdy things and has been passionate about fairy tales since she was a child – and she does not want to give it up. She may or may not be a cyborg.

Soman Chainani: he is fascinated by fairy tales. New York Times bestselling author, he published by Gutenberg the acclaimed series “The School for Good and Evil”, which had its third volume released in 2016. After a two-year break, he returns to the joy of fans with the fourth volume in time for the São Paulo Book Fair. Graduated in Harvard, when still in college, he wrote a thesis about why evil women were portrayed as irresistible villains. In addition to novel writer, Soman is an acclaimed screenwriter, his films have been screened at more than 150 festivals around the world, winning over 30 jury and public awards.

Victoria Aveyard: grew up in a small town in Massachusetts and attended the University of Southern California in Los Angeles. She graduated as a writer and tries to combine in her writing her love for history, explosions, and strong heroines. Her series “Red Queen”, published by Editora Seguinte, has sold more than 400,000 copies in Brazil and had the cinematographic rights acquired by Universal. The film will be directed by Elizabeth Banks.

Yoav Blum: is the author of “The Coincidence Makers,” an instant bestseller in Israel before being translated into several languages. The novel was purchased by Editora Planeta after a successful auction and was published in Brazil in 2017. With more than 50,000 copies sold in Israel, the book had its rights already acquired to the cinema.

Mario Sergio Cortella: he was born on March 5, 1954, in Londrina, in the countryside of Paraná. When he was 13 years old, he moved with his parents, brother and sister to São Paulo, where he is until today. In this city, he got married, had two sons and a daughter, and these have multiplied (for now) in two grandsons and a granddaughter. He graduated in Philosophy, got his master’s degree and a doctorate in Education at the Pontifical Catholic University of São Paulo, where he began teaching in 1977, he taught and researched in Postgraduate Education (Curriculum) and in the Department of Theology and Sciences of Religion. And he retired as a professor 35 years later. He was a guest professor at Fundação Dom Cabral (since 1996) and GVpec at FGV-SP (from 1997 to 2009). He was Municipal Secretary of Education of São Paulo (1991-1992). He is the author of more than 35 books with issues in Brazil and abroad, as well as a commentator on Radio CBN and TV Cultura. In this edition, he presents, in partnership with Maurício de Sousa, the book ” Vamos pensar + um pouco?”, published by Cortez.

Maurício de Sousa: was born on October 27, 1935, in a family of poets and storytellers, in Santa Isabel, in the countryside of São Paulo. As a child, he moved to Mogi das Cruzes, where he discovered his passion for drawing and began to create the first characters. At age 19, he went to São Paulo to try to work as an illustrator in Folha da Manhã (now Folha de S.Paulo). Got only a spot as a police reporter. In 1959, published his first daily story, with the adventures of the boy Franjinha and his dog Bidu. The strips of Mauricio de Sousa spread through newspapers all over the country, leading him to set up a studio that today gives life to more than three hundred characters. In 1970, he launched the magazine Mônica and in 1971 received the most important prize in the world of comics, the Yellow Kid trophy in Lucca, Italy. Following Monica’s success, other characters have also won their own magazines, which have already gone through the Abril and Globo publishers and are currently on Panini. From the comics, they went to the theater, cinema, television, the internet, theme parks and even art exhibitions. In this edition, he presents, in partnership with Mario Sergio Cortella, the book ” Vamos pensar + um pouco?”, published by Cortez.

Melina Souza: she is editor of the Serendipity blog that talks about her life experiences. She has a YouTube channel, which bears her name, which covers subjects such as fashion, book tips, travel, and decoration. She’s graduated in psychology and has also published her first book, “O guia para ser você mesma” in 2016.

Monja Coen: she is a founder of the Zen Buddhist Community of Brazil, established in 2001, based in São Paulo. She had her first contact with Zen Buddhism at the Zen Center ofLos Angeles where she made the monastic vows in 1983. She resided for eight years at the Nago Female Monastery in Japan, where she graduated as a special nun, able to teach Buddhism classes for monks and lay people. Under the guidance of Shundô Aoyama Dôchô Rôshi, her training teacher, she was the first female monk-leader of the monastery. She presents a program on World radio, whose content is based on the book “Zen pra Distraídos” (Editora Planeta), released this year.

Nilton Bonder: Rabbi of the Jewish Congregation of Brazil, stood out internationally as one of the greatest literary interpreters of the old Jewish wisdom and also as active defender and promoter of religious ecumenism. Bonder published more than 20 books by Editora Rocco, among which we highlight the trilogy “The Kabbalah of Food”, ” The Kabbalah of Money”, and “The Kabbalah of Envy”.  His work “Our Immoral Soul”, which gave rise to the homonymous play played by Clarice Niskier, is one of the greatest successes of Brazilian theater. “Alma & Política” is his latest book and will be released in São Paulo Book Fair.

Pam Gonçalves: produces content on pop culture for internet focusing on literature for young people since 2009. Formed in advertising, she also created in 2009 the blog Garota it. Today she devotes herself exclusively to the YouTube channel that bears her name. In 2016, she released her first book, “Boa Noite”.

Babi Dewet: she has always made music the main theme in her stories, especially the Korean pop universe. She has released the trilogy “Sábado à Noite” books, the collections “K-Pop – manual de sobrevivência – Tudo o que você precisa saber sobre a cultura pop coreana” and “A Year Unforgettable”, and “Cidade da Música” series. She is responsible for the channel Dramafever, Korean dramas portal; runs her own channel on YouTube and features the Kpop Point program on PlayTV.